The Chin Human Rights Organization (CHRO) is deeply horrified and disgusted by the execution over the weekend of four prominent political prisoners, including Ko Jimmy & Phyo Zeyar Thaw by SAC military junta. The judicial executions were carried out for the first time in Myanmar since the hanging of Salai Tin Maung Oo over 46 years ago, despite global protests, and in violations of fundamental principles of justice of fair trial, and constitute the deprivation of the right to life and freedom from cruel, inhuman and unusual punishment under international human rights law. 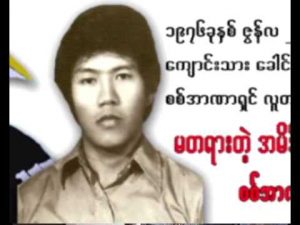 Salai Tin Maung Oo was the last known political prisoner to have been executed, in 1976

It represents a cowardly act of a junta desperate to cling to power through the instruments of fear and terror. In light of this latest despicable acts of utter and complete disregard for world opinion, the international community must now take matching punitive actions against the junta, including further targeted economic sanctions and complete alienation of the illegal military junta from all international arena and diplomatic avenues. It is now particularly timely for ASEAN to review its relations with  the junta and to stop enabling them, including, by expelling or suspending Myanmar from the regional bloc’s membership altogether.

We offer our deepest condolences to the families of the two martyrs.

APRRN urgently calls on the Bali Process Co-Chairs - Indonesia and Australia - to strengthen regional mechanisms, including activating the Bali Process Consultation Mechanism when boats are in distress at sea. There is an urgent need to address the increasing loss of life at sea, and ensure that failures to conduct rescue at sea within Search and Rescue Zones are not repeated in the Andaman Sea and Bay of Bengal

The Asia Pacific Refugee Rights Network (APRRN) is gravely concerned over reports that Malaysian maritime authorities pushed back Rohingya refugees arriving by boat on 16 April. Re ports indicate Malaysian authorities refused to allow the disembarkation of a fishing trawler with approximately 200 Rohingya aboard. This action comes a day after Bangladeshi authorities rescued a boat of 396 Rohingya refugees that had failed in its attempts to reach Malaysia. According to a survivor, both Malaysian and Thai authorities prevented the boat entry to their respective territories. At least 28 individuals are reported to have died over the course of the journey